The Charity That Began at Home

George Bernard Shaw called St. John Hankin “the Mephistopheles of the new comedy.” At Hankin’s funeral, Shaw eulogized him as “a most gifted writer of the high comedy of the kind that is a stirring and important criticism of life.” Granville Barker rated THE CHARITY THAT BEGAN AT HOME as the best of Hankin’s plays and Hankin himself agreed.

Remarkably, none of Hankin’s plays had ever been performed in New York until the Mint’s production of THE CHARITY THAT BEGAN AT HOME in 2002. A comedy about how an Edwardian family’s all-consuming commitment to kindness turns its household upside down, the play’s last professional production had taken place in England in 1917.

Critics and audiences were thrilled with the discovery of this neglected play and its author. “Provocative…a layered and surprisingly rich play…very modern indeed,”1 enthused Bruce Weber in the New York Times, while Michael Feingold in the Village Voice declared Hankin’s stinging comedy “suggests Joe Orton with kid gloves on.”2

St John (pronounced Sin Gin) Hankin began to contribute humorous essays and dramatic parodies including new “last-acts” for well-known plays to Punch magazine 1898.  In 1901 some of his contributions were anthologized as Mr. Punch’s Dramatic Sequels.  Hankin also contributed about seventy drama reviews to The London Times before beginning his career as a playwright in 1903 with The Two Mr. Wetherby’s.  Hankin was actively involved in running the Stage Society, a London theater group that supported plays of literary merit, founded in part, to avoid the Lord Chamberlain’s censorship.

During Hankin’s youth his father suffered a nervous breakdown, which left him an invalid.  Hankin himself began to suffer from increasing ill-health in 1907 and he was plagued with the fear that he would suffer the same fate as his father.  On a “dull, sultry, wet” day in June of 1909, St John Hankin tied two seven-pound dumbbells around his neck and drowned himself in the river Ithon.  He left his wife a letter expressing his fear that he would “slip into invalidism,” which he could not bear and ended by telling her, “I have found a lovely pool in a river and at the bottom I hope to find rest.”  George Bernard Shaw described his death as “a public calamity.” 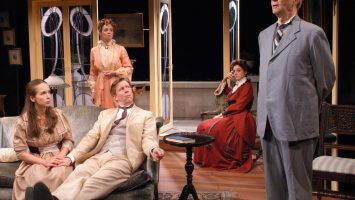 A panel discussion on philanthropy and the nature of charity, with special guests Helen Blieberg and Stephen D. Solender. Blieberg is an adjunct professor at The New School and City University of New York. Most recently she was the Fund Administrator of the A.R.T./New York – Andrew W. Mellon Foundation Arts Relief Fund. Solender is President-emeritus of United Jewish Communities. He is also a recipient of the Lifetime Achievement Award from the UJA-Federation, New York.

« No Time For Comedy
Far and Wide »